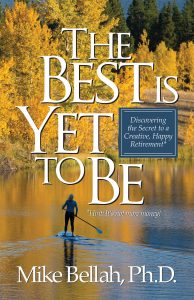 From the back cover of my new book:

What do you do when you want to retire, but the numbers don’t add up?

What if you want to work longer, but your company forces you out—with a buyout if you’re lucky?

What if family or physical issues push you to an unwanted early retirement?

When college professor Mike Bellah took an early buyout, he expected the golden years to live up to the carefree, happy times pictured in magazine ads. But, within weeks, the reality of lost identity and limited funds left him panicked and depressed. In The Best Is Yet to Be, Dr. Bellah uses extensive research, personal narrative and real-time blogs to explain how he got his hope back, and, with it, discovered the secret to a happy retirement.

“You’re no good. You’re no good.” My words, mixed with some embarrassing tears, sounded childish and vaguely familiar. They brought memories of what psychologist Philip Zimbardo called “past negatives,” traumatic experiences from years gone by, forgotten during good times, but all too real when life turns hard.

It was a sunny Saturday morning in June 2016, just a few weeks after I had taught my last English class at Amarillo College. I was lying face down on the floor of a small efficiency apartment supplied by the generosity of a friend (we had sold our home of 36 years and were mid-way in the process of building a new one). And I was in tears. Literally. Not one given to such outbursts, I was also ashamed. Not because of the tears but of what I thought one of the stupidest decisions of my 67 years. But I’m getting ahead of myself.

I had just gotten off the phone with a friend who told me why my usually upbeat loan officer had appeared so worried. “He’s afraid the committee won’t approve your loan,” were her words. What? Six months before I had sailed through the preapproval. And now I had more assets than then—a 401K, monthly teacher retirement payments, equity in some rental properties. Everything but—she finished my thought for me—“You no longer have your professor’s paycheck.”

It was my first lesson in retirement economics. Bankers don’t care about net worth; bankers care about cash flow. And my cash flow—the money I had to spend each month—had taken a hit. A big hit.

Funny how quickly things change. At the end of May, I had stood at the top of Atalaya Mountain overlooking Santa Fe and Northern New Mexico’s beautiful Rio Grande Valley. There, I felt like the luckiest guy on the planet. Surrounded by students and colleagues with whom I had experienced some of my happiest times, the climb was to be a capstone, a fitting conclusion to life as a college professor and the beginning of a happy retirement.

It wasn’t just the elevation in Texas that was lower now. My feelings, my hopes, were on the floor with me. “You’re no good. You’re no good.”

My loving, normally compassionate wife found just the words I needed. They went something like this:

“You’re not doing this. Get up and figure it out.”

I did—do something about it, that is. My book tells the story.