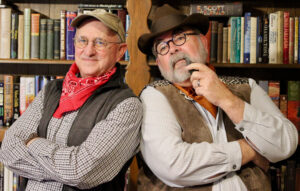 His mother called him Shug (as in “sugar”). So we all did. And we still do—although his size and somewhat rugged appearance don’t fit the name. Picture the Marlboro man with a few more years and a few more pounds.

Shug is one of my oldest, best friends. So when he moved back to his home town a couple of years ago, we picked up where we left off—with conversations filled with laughter and plans.

Yes, plans. More about that later.

Kenny Rogers and Dolly Parton said it best: “You just can’t make old friends.” How true! I’m blessed with numerous friends, many of them new. And I love that.

But old friends are special. Because they know the stories, which is the fodder for most of my talks with Shug. Stories of old teachers, of band trips, our Boy Scout experiences, the junior high bowling league.

Shug stole our team’s best female bowler (our only female bowler)—he says she came willingly—anyway, he, she and his cousin Dale ended up in a televised league in Amarillo. I guess I can’t blame J. The two boys she left behind certainly weren’t good enough for Channel 7.

I said Shug and I talk of Boy Scouts. He was in Troop 31, and I in 66, rival groups that didn’t exactly like each other. We still argue over it. Shug says 31 was more refined  (read crisp, snappy uniforms) and disciplined. 66 was known for its rugged outdoor activities where we replaced “snappy” with a more Daniel Boone look. I say he’s right. Daniel Boone versus Bart Maverick (a deadly shot but a city dude look).

And we talk of Lucy (not her real name), whom I have always liked, but she was Shug’s chief, childhood critic. Thus, the nickname we’ve given her.

Charlie Brown: “Did you see the new trick I taught my dog?”

Lucy: “Look, Chuck. You didn’t teach Snoopy anything. He taught you. He’s the one with brains.”

Like a good friend, Shug has taken an interest in my writing career (I’m getting to the plan). He’s a writer, too. Was once a newspaper publisher, along with a pig farmer, interpretive guide at a state park and a wagon master of a real wagon train. Seriously.

Shug has had over 30 careers. I call him P.T. Barnum. Give him a business idea and he can promote it.

Which is why I’m partnering with Shug in a new venture, a podcast called The Fun Side of Retirement. I’ll share current research on the subject. We’ll delve into Baby Boom nostalgia (remember the summer of 1958?) and we’ll share stories—which should be a hoot.

Because I like true stories, and Shug? Shug says made-up tales are more fun, and, besides, you don’t have to do research.

2 thoughts on “Shug and Me”