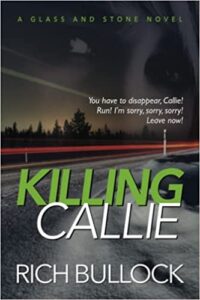 “Even though I was at the end of two careers spanning 30 years, I saw retirement as more of a transition into something new, not stopping and sitting around. I wanted to get into something creative.”

And what Rich Bullock got into was writing novels. “First rate thrillers,” according to one critic. “Edge-of-your-seat suspense,” wrote another.

Recently, I spent time with Bullock in Redding, California where he and wife Sheryl moved to be close to grandkids. I was there because Rich doubles as an interior page designer for other authors (he takes the raw manuscript and makes it look and read like a real book).

“I’ve always enjoyed seeing someone else’s dream become reality,” he said. And he does—Rich has designed all of my works.

And since many of my readers aspire to put their own stories to print, I asked what advice he has for new authors. Rich suggested attending writing conferences and workshops, which is how he began over 10 years ago. Then, get started, he said. “No one will read it if you don’t write the thing.”

For Bullock, getting started means beginning with a character (always female, always a strong, independent type) whom he places in a dangerous situation. “I keep writing until I’m about 25% of the way through my normal word count, and then I stop and try to figure out what the story is about.” “It’s the character’s story,” he added. “I’m just writing it down.”

In the end, what Rich hopes for is a tale he calls “unputdownable.”

If you read his reviews, you’ll see he succeeds more than not. After coming back to Texas with a copy of his latest, I texted the following:

“I don’t know whether to thank you or scream at you. Killing Callie had me from the start, and I’ve been sitting in this chair most of the last 24 hours. I’ve got things to do!”

You can contact Rich Bullock at richwordswriter@gmail.com. All of his books are available on Amazon.